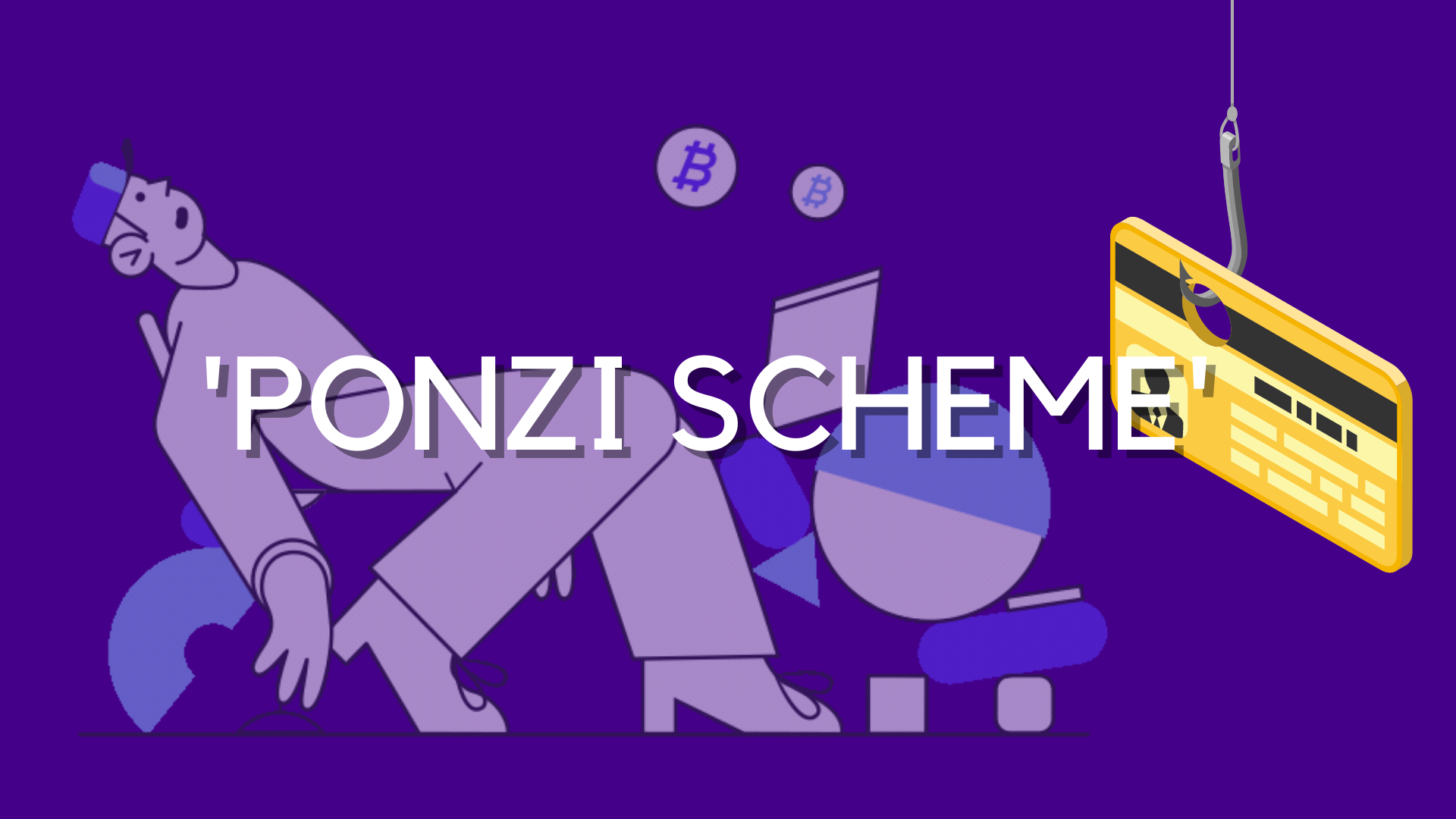 Is Bitcoin a Bubble/Ponzi Scheme?

The so-called economic journalists have kept calling Bitcoin a bubble/Ponzi scheme but are they even wise to say that in 2021? In today’s article, I am about to compare the two sides of the same and elaborate a little on the concerns highlighted by the experts on Television.

As of writing this article, El-Salvador has already planned a Bitcoin city at the base of a volcano with no income tax on Bitcoin. We know it is a small country but even a dumb person won’t throw away all his money into a pile of junk if that makes sense. Be it little or a big country, we must be open to looking upon their opinions.

United Kingdom, Singapore, Canada, Brazil, United States are some places where Cryptocurrency is regulated. Are these journalists telling that every other nation among these are fools?

Let’s look at the concerns raised

Yesterday, after looking at this on Twitter, broadly I could hear three major “so-called” concerns raised.

However, I do agree with her point that a single nation hasn’t cracked the regulatory framework yet & that’s because it isn’t something a single government can regulate alone. Bitcoin is programmed to be decentralized.

What can we call a ‘bubble’ in economic terms? Mind you I’m not an expert but from what I understand, a bubble is formed when the price of an underlying asset is much higher than what the fundamentals can justify.

We all clearly remember the US housing bubble in 2008, the Dotcom bubble, the Tulip bubble, and an ever-rising US Debt bubble now. Is the Indian stock market a bubble now? Sadly we can’t spot a bubble until one burst. Economic bubbles in 2021 are much more complex and harder to spot than they were in the early 1900s.

Can we call Bitcoin a ‘bubble’ from the above definition?

Before explaining more on the above question, we must understand the fundamental difference between ‘Hard Money’ and ‘Soft Money’. Anything that can’t be faked or artificially created can be termed ‘Hard Money’. Precious metals like Gold, Silver can’t be mined artificially by RBI or Fed but they found an alternate route of SGB’s (Sovereign Gold Bonds) which are as fake as them. If you want to mine real Gold, you’ve to dig underground. The same goes for Silver.

Let me remind you what happened in 1971. Money which we all use today became fake, aka ‘Soft Money ‘/Fiat Money. Banks & the Governments got the power of printing money out of thin air, whenever they thought it was necessary. In the name of maintaining financial stability money printers started rolling and today US debt is at an all-time high of almost $30 trillion dollars. Who pays for that? Consumers like you & me whose wealth is getting diluted by those money printers.

Hardcoding a maximum supply for some asset like in case of Bitcoin makes it ‘Hard Money’. Everyone knows only 21 million of those can ever exist. If we assume everyone thinks of holding Bitcoin at some point in the future, a maximum of 0.003 BTC is there for 7 billion humans on earth. Banks can’t fake it or the Government can’t fake it.

Does that make it a bubble? If an asset has a comparatively lower market cap naturally it gets more volatile. Gold has a market cap of over $11.5 Trillion dollars lesser than US debt 🙂

Bitcoin has so far only been able to reach $1 Trillion in the last 10 years. With more adoption, this asset will keep getting less volatile. That’s what a stock-to-flow model suggests technically.

The classical definition of a Ponzi Scheme goes like this. You have a central authority that keeps collecting fresh funds to give returns to old investors. A get-rich-quick scheme where investors aren’t sure where the returns are coming from.

Let me remind you that there’s no such central authority in the Bitcoin network. If someone dumps a huge chunk of Bitcoin or tries to hack the network by owning 51% of all Bitcoins (coughs.. $500 billion in today’s valuation). That would be self-sabotage.

Let me tell you though who is a Ponzi Scheme now operating in broad daylight with no one even noticing. You guessed it right! The US Government. They keep raising the debt ceiling to operate. If the fed stops printing fresh money, the US Government would collapse. This documentary is a must-watch for those who are reading it still here.

This was a problem earlier but now has been solved thanks to the blockchain community. Environmental concerns arise due to the mining of bitcoin which is a compute-intensive task and consumes heavy electricity. That hashing algorithm worked on Proof of Work (One that requires more electricity). Proof of Stake on the other hand is the next step for crypto where you don’t need high electrical consuming devices or miners.

We have an article on Proof of Stake that explains how either of them is unique and different in terms of electricity consumption.

Fiat money on the other hand requires paper that is obtained by cutting trees and harming the environment. The capitalism it encourages is even dangerous and exploits the poor people by widening the gap between sections of people. US dollars are backed by military power, fear of sanctions, and America’s dominant position in the world economy.

Bitcoin solves all of these by transferring ownership to people.

Crypto and blockchains are distinct

The term blockchain denotes a ledger that can be used to check the legitimacy of transactions conducted through it. Blockchains can be private or public based on the network running over the technology.

Private blockchains can operate within a single company, bank to bank, or even while issuing CBDC’s. But on this type of blockchain, we as a public won’t be able to trace any random transaction without approval from a central authority. Can you see the electoral bonds who purchased them? When? Where did the money go? Who obtained it? How was it spent? If the answer is all no, then it’s a private blockchain. One that’s corrupt and can be manipulated.

On public blockchains like Bitcoin, everything can be traced back to the source. All you need is a central point to tap those wallets. For example, we have a Bitcoin wallet (1F1tAaz5x1HUXrCNLbtMDqcw6o5GNn4xqX) which we don’t know whom it belongs to. If this person ever deposits the funds to an exchange that has KYC norms, we can track all the people and contacts this guy ever interacted with. That’s the beauty of public ledgers. It’s all anonymous until you want to deeply look into it.

If someone is buying crypto, then that person is among the 3.7% population of our nation that believes in a world beyond bank FD’s. When people buy equity, stocks, or crypto the normal perception should be that he/she is well aware of what they are buying.

Volatility comes with risker assets like stocks, equity mutual funds, or crypto. When the returns get higher the risk also does. No one can get higher returns without any risk, that’s how it works.

If some journalists claim that the youth is being misled then that’s a terrible breakdown of what the actual reality is. Betting applications are allowed in a country when we all know who makes the real money from those tv adverts and manipulated games.

However, I do agree that the risk part should be highlighted in a better way while showing those television ads.

In short without trying to understand the entire picture, one should not frame conclusions about the industry which everyone is trying to regulate. Money as a concept is evolving and so do the regulators need to act fast in a world that’s more interconnected than ever. Data is wiping international boundaries.

Thanks for subscribing!
bitcoin india newsis bitcoin a ponzi scheme
0