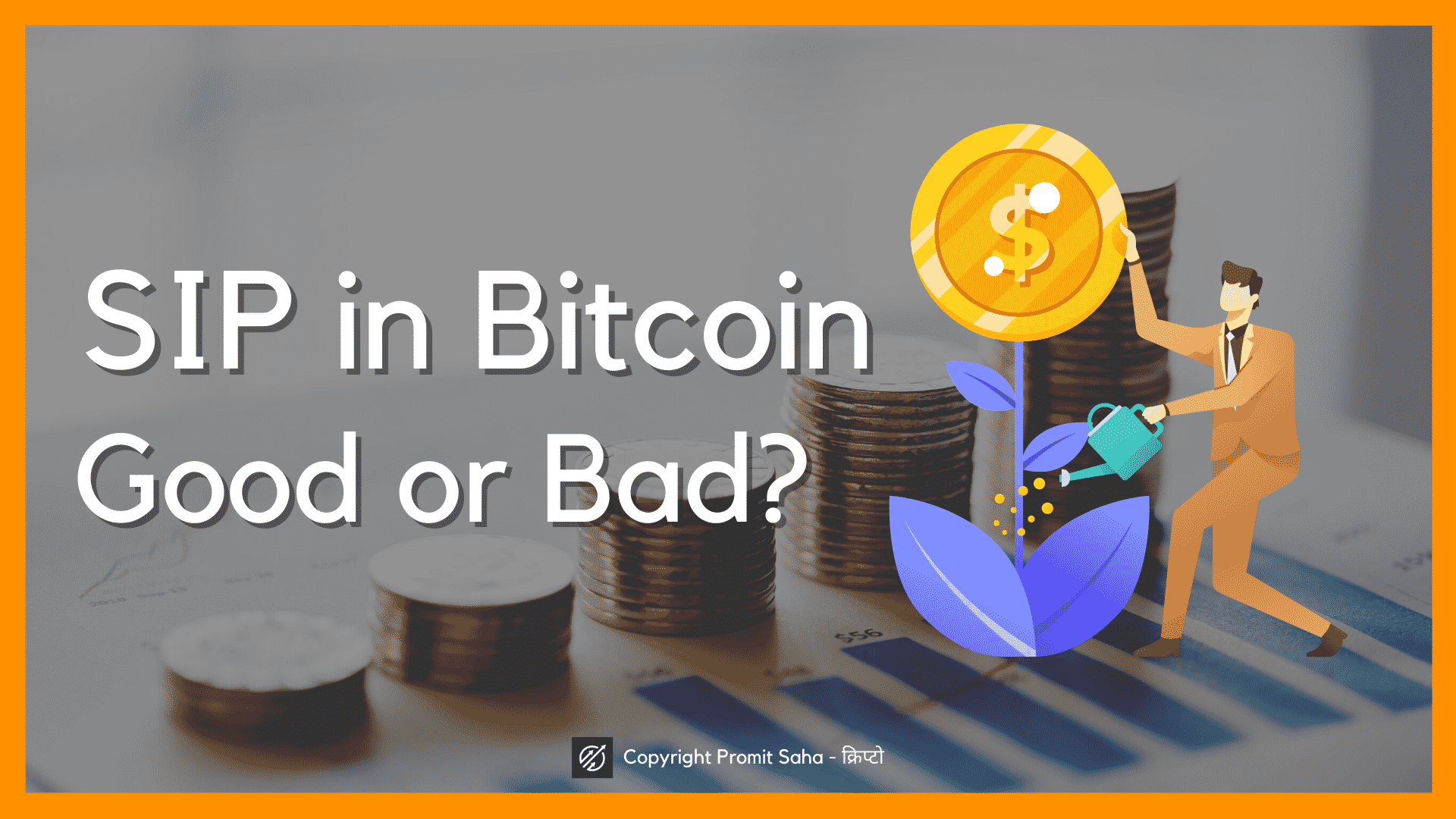 I’m very sure that a majority of people reading this article are familiar with the term SIP. SIP’s aka Systematic Investment Plan is one of the most popular ways of investing in volatile stocks/assets. You may ask why?

In this article, I have tried breaking down the pros & cons of SIP. How investors like you & me can benefit from a SIP of Bitcoin. What is Dollar Cost Averaging & lastly, if Bitcoin is even worth it in long term?

Before we start, there are a few criteria for SIP’s to work over a period of time.

“Why should the prices go up?”. This is the most crucial thing to look for before starting a new SIP. If I relate this with the traditional stock market, people expect it to go up irrespective of all the tragic events happening in-between.

Had that been not the case, Sensex wouldn’t have given a 10,354% return to date. Only if someone is confident about the future of Bitcoin over the next 10-15 years, SIP strategy should work in favor.

Whenever someone is buying an asset, the normal bet is long-term price appreciation. The same rule applies to Bitcoin as well.

You won’t be getting rich overnight.

One must not expect to become an overnight millionaire now by investing in Bitcoin in 2021. Gone are those days of early adopters. While I do agree we are all very early into the market but imagine buying Bitcoin in 2010 when the price was around $1.

What can you expect reasonably? Well, for starters you’ll be beating the biggest downside of Fiat Currency which is Inflation. In Bitcoin, there’s no inflation stealing your wealth every now and then.

However, if that doesn’t make you feel satisfied there is a lot more. American President Joe Biden just announced the $1 Trillion dollar Infrastructure bill a few days back. When the government prints money, you’ll see your portfolio swell in Fiat terms.

If numbers are confusing you. Let’s plan it out with an Excel Sheet. In the example below, I’ve taken an estimated return of 30% CAGR over a period of 15 years. The Investor is putting $100 every month without fail into Bitcoin. With a Standard Deviation of 5%, you can see the future values yourself.

I don’t want anyone to blindly trust me claiming a 30% CAGR on Bitcoin. There will be moments of negative return and market corrections in between. It is all based on the hope of Bitcoin getting adopted globally as a store of value.

As years pass on further, the bull market returns won’t be as much as it is today. There will be much lesser volatility by the end of this decade. Hence, an annual return of 30% makes sense to me. This can be totally different from the estimates of a pessimist who believes it will end up at zero. Huh! There are people who think that as well.

How much shall you invest?

If you’re investing in Bitcoin, it should not be the money you may need urgently during an emergency. The longer you can hold BTC, the higher are the chances of a good return.

Hence, only invest what you can afford to lose. Even if that’s Rs 100 for you, it is totally okay! At least you started. Trust me most people haven’t taken that first step yet.

Don’t get into FOMO of your friends putting in Rs 10,000 or Rs 1 lakh into Bitcoin. Everyone works at their own pace & is different. Maybe that person is okay with losing Rs 1 lakh which you clearly can’t afford to lose.

A consistent monthly investing approach is anytime better than a single lumpsum entry. Unless one is trying to time the market, which as a long-term investor nobody should, being consistent & dividing the investment over a period of time is where the sweet spot lies.

Not only does that minimize the risk but also lowers the cost of acquisition.

What to do during a Market Crash?

People take various approaches while the market crashes. If you’re on Twitter, you may have seen people posting screenshots of shorting BTC. Day traders take leverage to maximize profits during a market correction.

Pessimists come to the foreground and the world of Bitcoin will seem coming to an end. What happens next? Bitcoin gives no attention to the opinions of journalists, media houses, politicians, or any veteran investor. It is programmed to be out of the traditional financial world.

So, whenever there is a market correction, we as an investor should start buying the dips. As I mentioned above, it brings down the cost of acquisition for us by averaging the buy price. Apart from that, don’t try to dive into the futures market. Leveraged trading hasn’t helped most people, only a few people who are experts can make money from it.

If you’re not sure exactly about what leverage is then just ignore the above part.

Thanks for subscribing!
Bitcoin SIPWhat is Bitcoin SIP
0