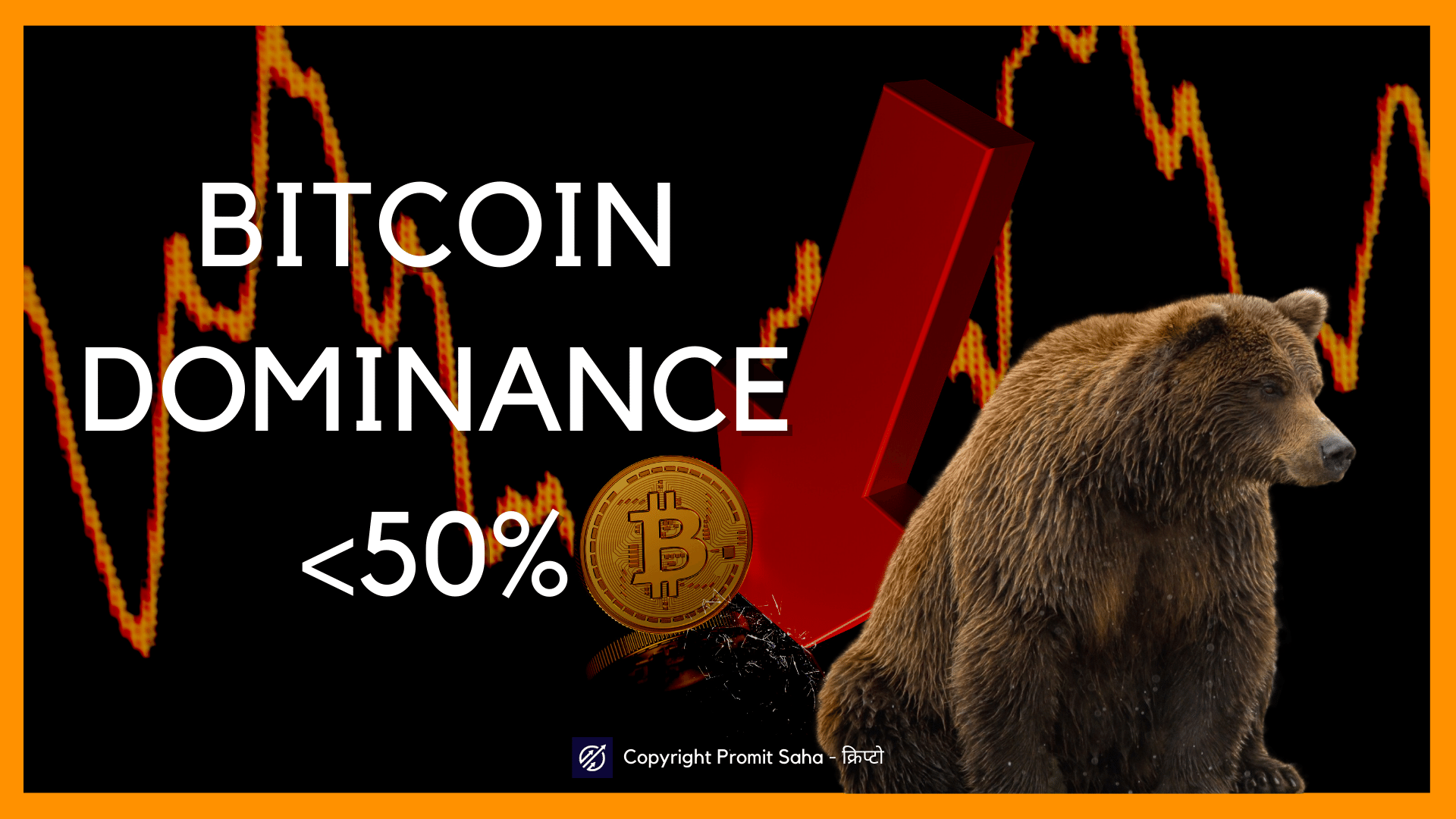 Why Bitcoin Dominance is Falling in December 2021

Back in January 2021 Bitcoin Dominance was hovering around 70%. Today as we are approaching the end of 2021, Bitcoin dominance has fallen to 41%.

Ethereum dominance on the other hand has gone up from 12% in January 2021 to 21% in December 2021. Some market analysts predict we are at the top of the bull cycle and the bear market is about to kick in sooner than anticipated. However, not everyone is buying the story and people are hoping Bitcoin to cross at-least $100,000 by early 2022.

The big question is, what will happen next? Are we about to witness a market correction like 2017 or the big picture is about to come?

This was the year when Bitcoin gathered some mainstream adoption. People started betting wildly on Bitcoin without even understanding the underlying technology behind it. The price soared quickly to around $20,000 and the optimism of investors made it swell up like a bubble.

Then on 27th December, it all came crashing down to $12,000 as the news of the ban emerged from multiple countries. People felt it was the end of Bitcoin & cryptocurrencies. China imposed a ban on all ICOs & cryptocurrencies. Even exchanges were asked to not allow Fiat <> Crypto conversion.

Even RBI didn’t take too long to impose a banking ban on all exchanges in India that were offering Crypto related services at a much higher premium than international markets.

The following year, 2018 some major FUD incidents were lying around related to the hack incidents in Japan & Korea. This made investors panic sell their Bitcoin looking for an exit from the market.

But that doesn’t mean Bitcoin dominance fell for all these crackdowns in past. Today the story is much different from what it was back in 2017.

Defi boom happened in 2019 & 2020. Today the entire Decentralized Financial Sector is valued at over $94,000 million US dollars according to Statista. Multiple protocols have had their ICOs in 2020 & 2021 offering a variety of use-cases.

Take an example for reference. Today 94 projects out of 100 are built on Ethereum Network. That opens up a lot of investment opportunities for both institutional and retail investors in the space.

Bitcoin as a cryptocurrency has no particular utility apart from being a store of value & as a medium of exchange. But Ethereum today is powering multiple dapps & protocols, all of which are projects run by actual founders. I am not saying all the Web 3.0 products will be a success story a few years down the line but people are building on the blockchain which is a lot different than 2017.

Why did the Bitcoin dominance fall?

When innovations are happening around the altcoins industry on Ethereum, Solana, Polygon, etc it is usual market activity to see capital flowing from Bitcoin to altcoins. Investors are confident about altcoins projects which makes them sell Bitcoin to buy utility coins/altcoins.

Unlike Bitcoin, altcoins are not known for being a store of value but rather they have use cases attached with the tokens. Some projects which are DAOs offer governance power to the token holders. A popular example of such a project is UniSwap which is the biggest DEX operating on Ethereum Blockchain. UNI token holders can vote on how the protocol is operated in the future.

Apart from the use cases, in 2021 we have seen multiple NFT based platforms skyrocket in terms of market valuation. Axie Infinity for example has a volume of roughly $3.4 billion US dollars today. CryptoPunks which are a software-generated collection of 10,000 punk-style characters accounts for over $2.2 billion US dollars in valuation.

How long will this trend continue?

MANA, the currency of Decentraland, a virtual world on Ethereum blockchain allows users to monetize content and applications became wildly popular among gaming fans in 2021 because of the soaring price of the token.

Play-to-earn games have also grabbed the attention of the entire market with investors pouring in millions of dollars behind the projects.

In the middle of all the noise, Bitcoin has been fairly consistent in prices for multiple weeks. Today it is around $48,000 US dollars and people like Michael Saylor are buying more Bitcoins during the dip.

Amid the killing inflationary pressure, it is highly unlikely to believe that we are entering a bear market in Bitcoin. This is completely my own opinion of looking at the price of Bitcoin right now but a Hard Asset class like Bitcoin can’t be so cheap over a period of the next 5-10 years.

Bank FD’s for reference is providing around 5-6% APY in India which is much lower than the actual inflation. If one looks at it even closer, it is a negative rate of return. Nobody is complaining yet but silent inflation is destroying the wealth of probably millions of people across countries.

The Stock Market is making an all-time high every other day just because of the excess liquidity available in the market that was injected by the central banks. Bitcoin maxis believe it to be a bubble that would pop once the interest rates are raised. That would instantly wipe billions of dollars in a wealth of retail investors who poured in their hard-earned savings into the market.

If the central banks choose not to hike the rates, well you know Inflation has already started making our day-to-day expenses costlier.

Experts like Matthew Dibb, COO of Stack Funds believe that like the rest of the market which is signaling towards altcoin domination, Bitcoin is likely to remain trading sideways in the short term.

People who understand Bitcoin fundamentally are still bullish on the blockchain-based virtual asset over the period of next 10 years.

Which one are you? Let us know in the comments.

Thanks for subscribing!
Omicron Fear Rises in BitcoinWhy Bitcoin Dominance is falling
0