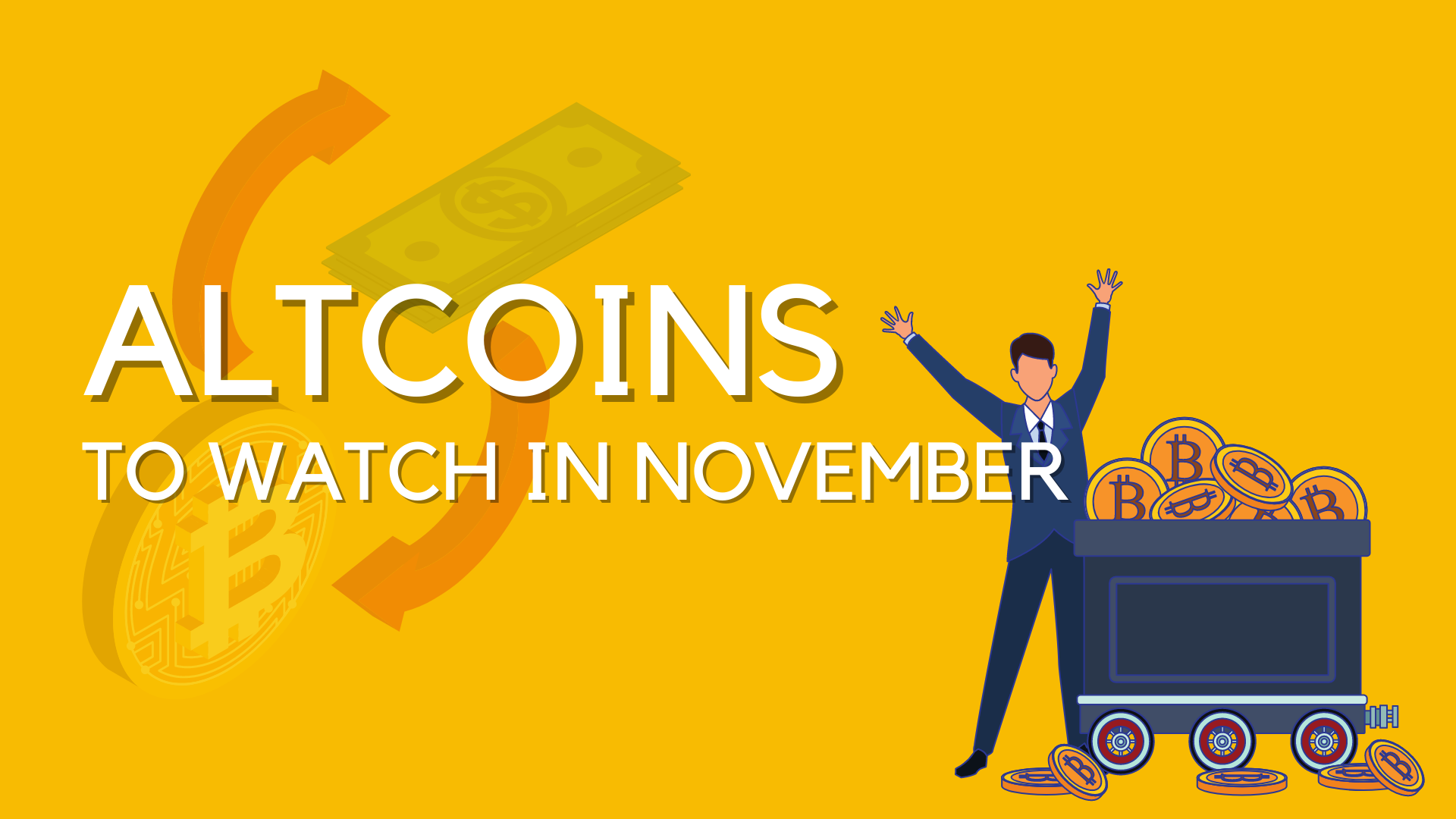 Which AltCoins to buy in November?

Apart from Bitcoin, the biggest crypto asset, Altcoins are starting to claim a larger portion of the overall global cryptocurrency market. Bitcoin reached another fresh all-time high of $66,930 on October 20th after the launch of Bitcoin ETF by ProShares on the NYSE. The current cryptocurrency market cap stands at over $2.5 trillion USD with Bitcoin dominating around 44% of the pie. Gone are those days when dominance stood at over 90% dominance in 2014.

Anything apart from Bitcoin can be called an Altcoin. Coins like $SHIB, $DOGE, $SOL have given the investors a massive ROI during this bull run. A meme coin once created as a joke is worth over $34,512,463,183 today. The competitor for that meme coin is over $34,475,266,733, all these numbers may seem crazy for some new investor who’s willing to hold coins for the long term, and today’s article is exactly the place where I’m about to share the coins that I think will be valuable in future.

Facebook recently rebranded itself as Meta. Apps that we all have been using are taking a leap ahead towards the metaverse. With that, you could be wondering what is a metaverse?

I came across a beautiful definition of metaverse on a Twitter space hosted this Saturday night. Anything that has people’s attention online can be called a metaverse. That can range anywhere from a Kid playing inside a virtual battleground with his friends on a PUBG match to broader communities on Facebook.

Imagine while playing games like Counter-Strike or PUBG, everyone irrespective of their nationality, color, race, religion has virtual avatars. These avatars can be customized to reflect one’s personality on that specific metaverse.

People communicate using those avatars in their community and all of that happens on the internet without barriers. That is a metaverse. Another example of the metaverse is decentraland, which was launched back in February 2020. Decentraland is a non-profit ethereum based 3D virtual reality platform where anyone can participate and engage with others.

Ownership of rare and precious materials is being shifted to blockchains. Artworks minted on ethereum are transparent, verifiable, and could be valuable as more and more people start collecting these NFT’s. Facebook switching to a metaverse could open up a ton of possibilities for people collecting these digital artworks. Setting a CryptoPunk as a profile picture could be verifiable and even a status symbol for people in a metaverse.

AXS is the governance token for the Axie Infinity game. Users holding the AXS token can vote on governance proposals to change or modify the game features. Unlike traditional games where changes are decided by the developers only, Web 3.0 games like Axie Infinity give this power to the token holders. Token holders can also stake these tokens to earn even more AXS tokens and increase their voting power. This can be a long-term bet for many people.

Decentraland is a VR world powered by Ethereum blockchain. In the virtual world, users can buy or sell land (which is an NFT) and build them into a larger estate. The native token MANA is an ERC-20 token and can be used to buy or sell land or pay for Goods and Services in Decentraland. Anyone who’s a fan of VR might be interested to look out for this project.

Sandbox is a community-owned virtual world. Creators can host games and events in the virtual world. The unique feature of this project is that users can have true ownership of the virtual world assets in the form of NFT’s. By doing so, players and creators will be able to participate in the economy by assets trading and earning tokens making it a play-to-earn game. The Sandbox token is another project related to the metaverse, NFT, and gaming category. Anyone who’s a fan of these can think of holding this token long-term.

Crypto is definitely revolutionizing traditional finance. Projects that have a faster payment time, lower transaction fees, and merchant support could be considered as long-term bets.

Matic later rebranded as Polygon is a layer-2 protocol that scales existing Ethereum blockchain and extends support to developers. Faster transactions and lower fees mean more adoption among the masses. It is an easy-to-use platform and the token Matic can be used to secure the system using governance. In the future, if ethereum becomes the blockchain of the internet then you can’t miss out on Polygon token.

SXP is the network token of swipe. If users want to use the Swipe Wallet or any of its products SXP is used to make those transactions. Swipe is the payment backbone for Binance Cards and processes the transactions for crypto to fiat. The protocol has been built on Ethereum and is currently working on their own chain (Swipechain). This project also has features for merchants who can use the infrastructure of Swipe to accept crypto payments. Lastly, it is backed by Binance team and can be a token for long term holders.

It is a general purpose blockchain similar to Ethereum. The biggest feature of Solana is the scalability which it offers to the people. Solana is able to process 700,000 transactions every second. The native currency SOL is used to pay for transaction fees and staking to support the network. However, on 15th September, the solana team did a reser to revive the network which collapsed for some reason. I don’t suggest it as an Ethereum killer but if you’re tech savvy and want to bet on some form of Eth alternative, then Solana could be the choice.

These are the tokens which rely on the exchange issuing them. BNB for example has a lot of utilities because of Binance and the BSC chain. If the issuing exchange keeps growing in future, then there’s a high chance of breakout in prices of these coins. I’ve made many videos related to these type of projects which you can check out on my channel.

Popular names are BNB & WRX. WRX is the exchange token of WazirX which is one of India’s largest exchanges.

That was all for this quick article about NFT based coins, Fintech based projects and Exchange tokens. We’ll write more posts about altcoins in the coming months. Thanks for reading.